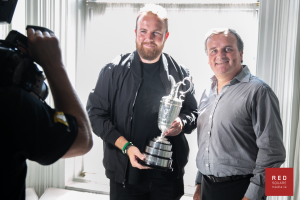 Shane Lowry (born 2 April 1987) is an Irish professional golfer who plays on the European Tour and the PGA Tour. He recently made history after claiming the 2019 open title, winning a €1.73m prize fund and bagging himself the coveted Claret Jug too!

Over 237,000 people turned up to Portrush, Co. Antrim last weekend to see the Offaly native win the Open. The amount of backing he received over the weekend shows just how loved he is by his supporters across the world. He always remembers his family and community in Clara where it all began. They are extremely proud of him and his accomplishments.

This has been a massive win for Shane and he owes a lot to his family and his supporters who’ve been a constant encouragement in his life. Approximately 10-15k people were waiting to greet Shane as he brought the Claret Jug back to his hometown in Offaly.

For Red Square Media, filming Shane’s homecoming was an incredible experience! It was a privilege to interview Shane and document such a momentous occasion. We filmed an interview with Shane at the Dublin press conference and also interviewed his brother Alan Lowry, who was full of admiration for Shane.

We then followed Shane back to his hometown where we captured him receiving a warm welcome from the adoring locals. We interviewed those who knew Shane from a young age and had nothing but kind words to share. The crew at Red Square Media worked round the clock to deliver the content to the client in a short time frame.

The video was a huge success and appeared on the Irish Independent website garnering thousands of views. Red Square Media produced 3 Instagram stories, a shortened interview piece for social media and an extended piece for the press.