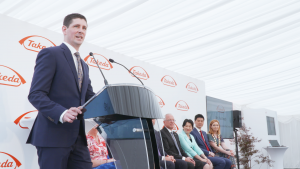 Takeda Grange Castle is a Pharmaceutical Company based in Dublin. The facility specializes in the development of the oncology medicine that deals with the prevention, diagnosis, and treatment of cancer.

Construction of the plant began in June 2017 and was managed by Project Management Group. A grand total of 40 jobs will be created at the site. The new plant is a very unique facility that brings all of the stages of manufacturing under one roof. It’s high containment, very technologically advanced and its giving way to a phenomenal stage in Takeda’s growth.

The day of the launch was a truly proud day for everyone involved, the project manager, the CEO, the Japanese ambassador and everyone else that attended were so impressed with the grand opening. There were information booths, a Japanese cloud tree, and a Japanese sun dial that was made especially for the opening of the plant. 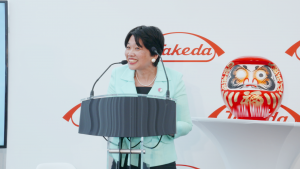 Our crew at Red Square Media had the honour of covering the grand opening of the new facility at Takeda. We made sure to get plenty of shots of the VIP’s they were touring the new facility and we captured some shots of guests and employees as they arrived at the site.

And most importantly we captured footage of the guests of honour making their individual speeches. It was also very important for us to get lots of shots of people smiling and laughing as this was a momentous occasion. And we wanted to convey that positive energy in our finished video.

Once the event was over the crew at Red Square headed back to the studio edited the footage into a few different video formats as per the client’s request. Once the edits were completed, we sent the video to the client. The client was so impressed with the final product and they gave a lot of positive feedback. 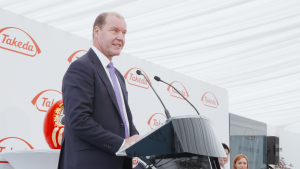 Christophe Weber (President and CEO of Takeda) Proudly announcing the launch of the new Takeda site.